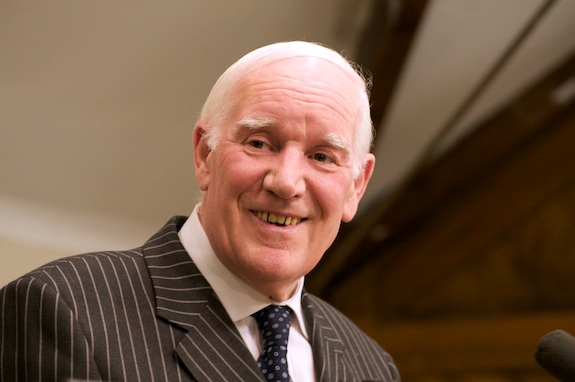 Albert Chambers was born in Portadown, ~ Northern Ireland, the eldest of 9 children.

A thief and a robber – that’s what Albert Chambers ‘specialised’ in, when he was a teenager. Young Albert loved the ‘thrill’ of breaking into homes, businesses and even churches, making sure he was not detected even breaking in when the residents were sleeping!

What bought about the change? Facing an earthly judge, who had Albert’s future in his hands! Facing that judge made Albert Chambers realise that one day he would have to face “The Judge” of all the universe. Was he ready? Not at all!

How did it all turn around?

Young Albert’s final crime was to imitate a policeman, break into a person’s home and steal their cash. He would have got away with this – but his partner in crime confessed and Albert Chambers, the young crimnal, was caught.

A prison sentence was a certainty – but as this earthly judge lifted him hammer to pass sentence, Albert raised his heart and mind heavenwards and promised God that should He get him out of this mess he would give his life to God and serve Him.

The judge stopped – went over all the evidence – and to the shock of ALL gave Albert a suspended sentence with a 5 year probation period. The police were dismayed!

However this was the turning point in this young man’s life. The following Sunday, as the church bells rang calling the towns folk to church, Albert Chambers climbed the stairs in his tiny house, got down beside his bed and prayed for God to save him. That was in April 1954, This was the start of a new life for Albert Chambers. The change was amazing.

There was much in store for this young man. There were sould to be reached far beyond his hometown and the shores of Ireland. In 1968 God called Albert Chambers to London. In 1969 he left full time employment and launched the full gospel ministry, World Vision for Christ.

World Vision for Christ was born on the 31st December 1969, with a handful of workers. Finances were limited, ‘office space’ was a front room in a house in East London, but at the organisation grew, so did faith and bigger steps were taken.